United For ALICE Report Tells a Tale of Two Pandemics

With the rise of the Omicron variant and cases continuing to surge, communities are grappling with the short and long-term effects of COVID-19. Research from United For ALICE reveals that individuals and families who were already struggling before the pandemic have been disproportionally affected by the fallout.

ALICE stands for Asset Limited, Income Constrained, Employed and represents households that earn more than the official U.S. poverty level, but less than what it actually costs to make ends meet in their respective communities. According to data from the 2020 ALICE report, 21% of Whatcom County households fell into the ALICE category, with another 15% living in poverty, meaning approximately 1 in 3 households in our community were unable to meet basic living expenses before the pandemic hit.

The Pandemic Divide: An ALICE Analysis of National COVID Surveys explores four national surveys through the lens of the ALICE Threshold of Financial Survival, the minimum income needed to live and work in today’s economy.

This report revealed that households living below the ALICE Threshold fared significantly worse during the pandemic than those with higher incomes – as reported in surveys conducted between March 2020 and May 2021 by the U.S. Census, Federal Reserve Board, University of Southern California and United For ALICE. For example, low-income households reported losing employment income at a markedly higher rate during the pandemic — 60% — in comparison with a 40% rate for middle class and high-income households.

Even with government supports in play, households below the ALICE Threshold reported higher levels of job loss, child care struggles, and health challenges than those earning an income that affords the basics, according to the report’s analysis. In addition, racial inequities are evident within the data, as Black and Hispanic households reported harsher experiences at every turn.

A tale of two pandemics 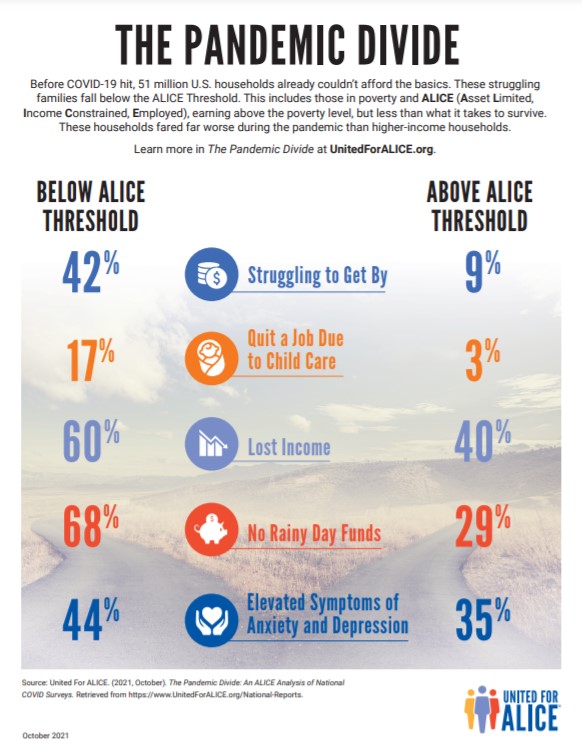 “When you dig deeper than the national average, which paints a somewhat optimistic picture of COVID-19 recovery, it’s clear that households below the ALICE Threshold travelled a much more difficult path – financially and emotionally,” said the report’s lead researcher, United For ALICE Director Stephanie Hoopes, Ph.D. “What we’re seeing also validates the ALICE Threshold as a meaningful measurement of financial hardship, given the significant differences between households on either side of it.”

The report takes a detailed look at these two divergent paths as they pertain to:

Child Care: Parents below the ALICE Threshold were more likely than those with higher incomes to be working reduced hours (24% vs. 16%) or have had to quit a job (17% vs. 3%) due to child care disruptions or virtual schooling for their children.

Financial Stability: In July 2020, about 42% of respondents below the ALICE Threshold reported that they were either “just getting by” or “finding it difficult to get by,” compared to less than 10% above the Threshold.

Expenses: Stimulus payments were used in different ways, with low-income households typically using their first payment to cover basic needs such as food, utilities, and rent. Their second stimulus payment was most often used to pay down debt. By contrast, those above the Threshold were more likely to put their stimulus funds into savings or investments, or to make a charitable donation.

“The Pandemic Divide shows how interconnected the struggles are for families below the ALICE Threshold. Job loss leads to food insecurity, which leads to health problems, which compromises a return to work,” said Kiran Handa Gaudioso, president of United For ALICE. “As the pandemic continues to drag on, and the struggles of these households continue to worsen, it reinforces that the time for change is now. No one solution will help ALICE workers achieve financial stability; it will require everyone to do their part to create meaningful change across the board.”

United Way of Whatcom County uses ALICE data to drive our work. We partner with local nonprofits, businesses, and community members to support basic needs, increase economic mobility, and break the cycle of poverty for individuals and families in Whatcom County. Our goal is to enable financial stability for every person in our community.